So what shall I waffle about in this warm-up to writing my 2,000 words? My word count last week was 10283 on the book (and 1192 on blogs) putting it at 125,843, which is about the length of Cowl. I’ve now opened another file called Pennyroyal2 in which I’m noting down ideas and transferring the occasional unused section from the present book. Maybe another week, or two, and the first draft of the first book will be done and I can move over to that other file. 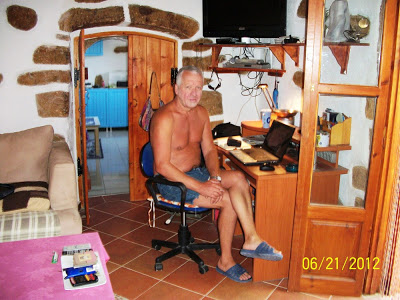 Someone asked me last night if, after a break (like the one I had doing the kitchen and other jobs around the house) I return to a book refreshed. Not really. Generally if I stop writing a first draft for a while that makes it harder to return to the writing. I have to reread a lot, check out any notes I made and try to remember that last bright idea I was toying with. This is why I’m pleased with last week’s word count – I quickly got back on track. 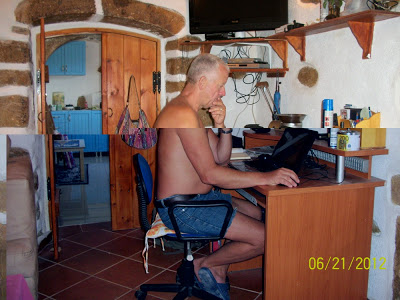 So, Samaras, of New Democracy, won the Greek election. He’s described as centre right which in Europe, for my American readers, means somewhere to the left of Obama. I’ve no doubt that the markets, and other European governments, will be relieved. However, Greece will not pay its debts; it simply cannot pay them. There’ll be delays in implementing ‘austerity’, there’ll be riots and protests on the streets of Athens. It’ll continue to be a bureaucratic nightmare to try and start a business here. Taxes will go up and new taxes will be introduced, thus killing off even more businesses. Corruption will continue to be rife. Fewer and fewer tourists will come here. And, so I’m told, the two hundred billion in Swiss bank accounts won’t be investigated, nor will the reason behind 45% of property sales in London being to Greeks, since many of those in power now are up to their necks in both. Now we can look forward to the whole train wreck continuing in slower motion, but a wreck it will continue to be.

Tuesday 19th June
So, today’s waffle: I did my 2,000 words (well, it’s generally just a little bit more than that) and am currently bringing my main characters together for a confrontation. Hah, even as I wrote that I remembered another plot element to deal with and made a note. Anyway, i can’t say much more about the book than that.

We’re off to Sitia this evening for a talk with a architect and a notary etc along with our Belgian neighbour. He bought his house along with a ruin beside it and has since discovered that the ruin is basically listed as a garden and he cannot renovate it. There are all sorts of rules and regulations here about how much you can build related to the land you have and things like whether that land is in village boundaries. He’s bought more land, and will be buying more still and is trying to wangle a way to get permission to do that renovation. However, I can’t see how this will work because you can’t add land to your own to increase the area you are allowed to build on because that was stopped in 2002 to prevent the proliferation of building. We are involved because our ‘house’ is essentially one half of a house of which he has the other half. We’re prepared to help, but are very wary of raising our heads above the parapet here. Allow the state and the bureaucracy to notice you and you can end up in a whole world of shit (which is another reason why this country is fucked). We’ll go along, listen, but we will not get involved unless absolutely 100% sure no shit is going to come flying our way.

Wednesday 20th June
Pretty sure no shit is going to be flying our way in fact we gain a little some in the way of building area, though the only way to go now for us is upwards – adding another floor – and we’re not really interested in that. If anyone is being shafted in any way it’s our neighbour, with all the fees and taxes involved. Anything we need, like a lawyer to check out whatever we have to sign, he’s paying for. In the end the aim of this is for his benefit and we just didn’t really have to get involved.

After this meeting we were invited for maybe something to eat and drink, but we had to head back for the England game against the Ukraine. This was for Caroline, though since it was windy outside I watched it was well (man of the match: that England goalkeeper Joe Hart). Of course I’m a little bit of an oddity here to many Greek men. To try and strike up some sort of rapport with me they’ll often resort to football, whereupon I have to direct them to Caroline, who knows more about it and has more of an interest.

‘So what are you taking to the G20?’ he asked.
‘Oh the usual,’ the politician replied. ‘Suntan lotion, swimming trunks, condoms and indigestion tablets – same package I take to those climate conferences.’

Thursday 21st June
I was ranting a bit here about the G20 and politicians before I started on my 2,000 words, but it was vague, so I deleted it. Anyway, screw all that. Now having done my 2,000 the Penny Royal thing is past 134,000 words and I’m now into the end game. A visualized confrontation has just started, wreckage and debris are strewn in orbit around a world I shan’t name right now, and I’m starting to truly realize that next week I’ll probably be making a start on the next book!

Now it’s time for Internet stuff, followed by a swim, then white wine, then a visit to the Gabbiano…