So, we’ve been back on Crete for six days now, the first three of which were colder than in England and required us firing up the stove throughout. It is much colder than last year because then we only used the stove in the evening, and that was upon arriving here two weeks earlier. There was surprisingly little wrong with the house. Yes, the paint is flaking off part of one wall in the hall and there are patches of mould here and there, but we’re now a long way from the days of black ceilings and water features in our bedroom. I’ve also found a way to deal with that flaking paint/damp area. I’ll do what I did, and which seems to have worked, around the lower half of the kitchen arch here: after scraping it I put on a layer of waterproof tile cement. There have, however been other annoyances, some unexpected.

The car we left here over winter became the home for a mouse and the little bugger ate through the HT leads. This wasn’t too much of a problem as the guy looking after the car for me had them replaced. However, since then a warning light has been showing. The garage guy traced this to an emissions sensor on the exhaust and blamed water in the petrol. My concern is that it might not be that and that somewhere else in the car bastard Micky has chewed through some other wiring. I also recollect my mother having similar problems with cars she owned – in one of which the dashboard caught fire because the wiring had been damaged.

The garden of course was a jungle, as you can see by the pictures here: 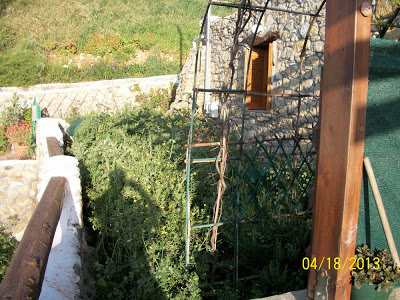 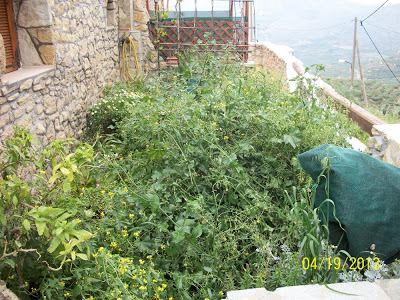 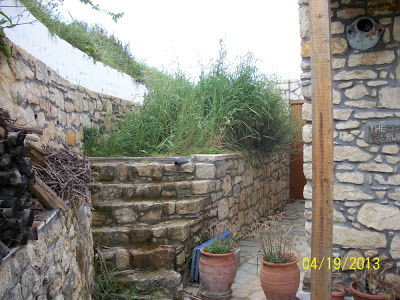 No problem, thought I: I’ll just get out there and pull them up. This will be good exercise for me and a welcome change from my sedentary winter. The problem was that my sedentary winter had turned me into a wimp. After one day of pulling up weeds I was thoroughly knackered, aching all over and had the grip of a pack of wet sausages. Three days of weeding later and this is where we’re at: 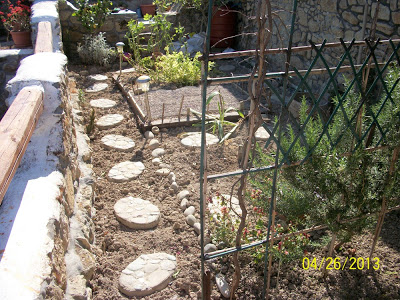 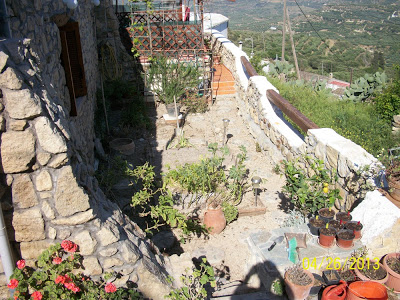 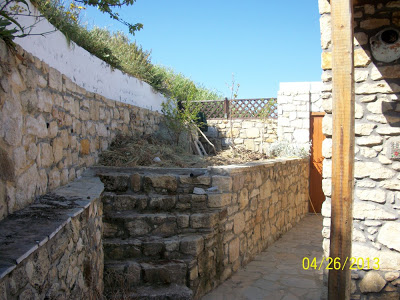 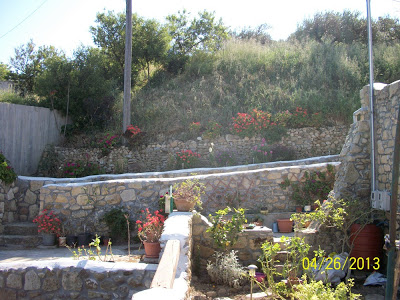 We spent two days at the house working on the garden and tidying stuff up. Not having any shopping in we tried the new taverna that had opened in our village last year. Positive points and negative points there: It’s cheap – a half litre carafe of white wine costs €2.50, and a souvlaki €1.50 – they have internet down there, just a short stroll from our house, but the owner, with typical Greek lack of foresight, even knowing that we are here now for six months, overcharged us on both occasions we were there. First time a couple of €s went on the bill for no reason at all, while the second time he charged us for a carafe of wine we didn’t have. My inclination is to say fuck him and never go back there, but that would be shooting myself in the foot. Next time we go down there I’ll warn him, ‘Oshi extras’ and if he questions that I’ll show him the two bills and explain.

It’s warmer now and we’re venturing out in shorts. We took a visit down to Makrigialos yesterday, had something to eat in a cafe called the Obelix, played about on the internet and paid for the next level of that highly addictive game ‘Sugar Crush’. Interestingly, while checking Twitter, I found a tweet from someone claiming to have been about to buy my books but being put off by my ‘abhorrent political views’. As a guy called Jim Braiden pointed out on Facebook: ‘Remind me again which side of the political spectrum spends so much time extolling the virtues of tolerance?’

In the evening here it was time for us to delve into the collection of DVDs we’d built up over the winter. The first film we watched was called Contagion starring Matt Damon and Jude Law. I usually enjoy this sort of stuff but the film was simply rubbish: disjointed, completely lack of emotion; completely lacking of fear. Oh look, people dying, sigh. Then, a couple of days later, I see a news story about bird flu killing people in China and now appearing outside that country…

The next film we watched was Passengers … I say ‘watched’ in the sense that we looked at it for a while in a way one would perhaps experience Vogon poetry. I turned it off before my small intestine crawled up my spine and throttled my brain.

We did enjoy the first season of Alcatraz – in fact just about anything with Sam Neil in is good – however, after a few episodes and having nailed down the formula, we wondered if we wanted to watch about three hundred episodes to discover what the hell was going on. Perhaps those who financed this thought the same, since it was cancelled after this season.

And while I’m on the subject of films: I watched a clip of Robert Redford being interviewed concerning his Sundance film festival. Apparently, with the way the film industry is now, he wouldn’t have become an actor but chosen some other career. What a berk. So, you’d have been off to Waitrose to apply for that job at the checkout would you Robert? Seriously, these actors don’t live on the same planet as real people. Oh, and that reminds me of one of the presenters on BBC World talking to someone about pensions and investments. Even he flinched after coming out with, ‘But how does that apply to ordinary people like us?’

Snigger.   Update: Having just checked under ther bonnet of my car I see Micky did chew right through the wires leading to the emissions sensor.