Well, as predicted, we’ve had rain most of the day. Responding to various emails I received during my last Internet session I’ve had to grit my teeth whilst answering comments about me being out there in the Mediterranean sunshine. Yeah, right. It’s just stopped raining at 1.00 in the afternoon and the temperature has risen to a staggering 14C. However I remain optimistic and think it highly unlikely this crap weather will continue into June and from then until October we should have horizon to horizon blue.

After visiting a couple down in Makrigialos and discussing the quality of the soil in their garden (it has little organic matter in it and is like red clay and turns to concrete when it dries out) I learned that they feel their problem might also be related to a complete lack of worms. We have worms up here so I promised to collect some for them – hopefully to get a population established down there. Now something else has occurred to me.

The problem with composting here is that a standard compost heap turns into a pile of tinder during the summer – it just dries out and doesn’t rot at all. I’ve got round this by buying a number of plastic bins in which to compost waste vegetable matter. The problem with this approach is the fun to be had emptying out the stinky contents, especially in the summer when the reek is eye-watering and a million flies at once zone in. So I’ve now decided, considering the above, that I’ll attempt to build a wormery. Checking the Internet I see that they’re quite simple. What I’ll do is use two big paint buckets, one inside the other, the lower one tapped to take off the ‘worm wine’, the upper one with air holes and drainage holes and layer of gravel etc. I often have odd little enthusiasms like this…

Friday 13th May
I read in Athens News that 50,000 people have been employed to take a census of the population across Greece. What an excellent example of how to waste money in a country billions in debt, teetering on the edge of ‘debt restructuring’ and quite possibly having to dump the Euro. Anyway, a day ago I spoke to some guy walking through the village with a couple of folders and, after a struggle with the language, learnt he was taking the census but that he would send an English speaker to our house today. Um, auspicious date for a visit from a government official, and why do I keep thinking about fava beans and a nice Chianti?

It’s windy cold and horrible today yet again. I cannot help but hope that the likes of Piers Corbyn are wrong and that we’re not going to end up with two or more years of this, and that others are wrong about the possibility that we’re entering either a Maunder or Dalton minimum. I also recollect reading somewhere about a ‘correlation’ between the onset of cold and nasty weather and earthquakes, which have been prevalent across the world. However, knowing the danger of ‘correlations’, I’ll try not to read too much into that.

Monday 16th May
It’s been a successful few days, depending on how you measure success. On Saturday, finally getting fed up of never being able to get into my apotheche, I used a borrowed circular saw to slice down the frame beside the door. This took off enough pressure for me to at last pop the door open. I then spent about an hour planing and sanding the door frame and side of the door, before moving on to build the first of three shelves inside (using the wood from disassembled pallets). This was on the first day of warmth and sunshine for a while, though it was windy. 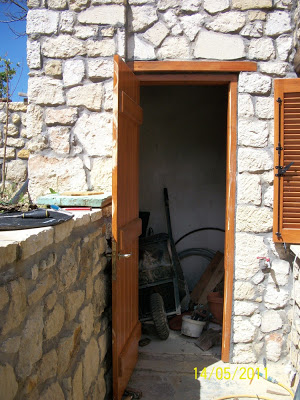 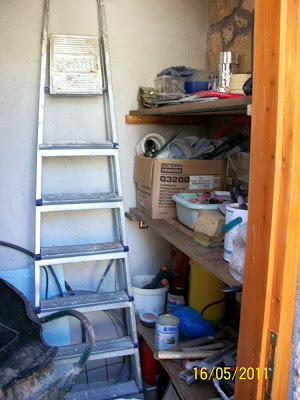 On the Sunday I built the other two shelves, moved loads of clutter and tools from the house and stored that inside before we headed off down to the ‘Golden Beach’ restaurant in Makrigialos for a meal. Previously I had spotted a large piece of wood dumped at the side of the road which I thought might be useful for more shelves so, on the way back from the restaurant I stopped to pick that up, however I ended up driving back with a car full because someone had dumped trellises at the side of the road too – perfect for the wall dividing off our back garden from the one next door. Why scrounge up wood from the side of the road? Wood that you burn in your stove here is upwards of €100 a truckload whilst the piddling amount of wood I bought to build a shelf in what I will call our wardrobe space cost €50. Incidentally, this was another day of sunshine and my back now feels slightly sizzled. 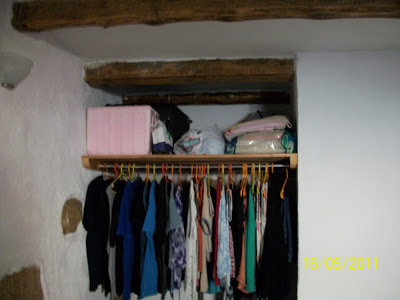 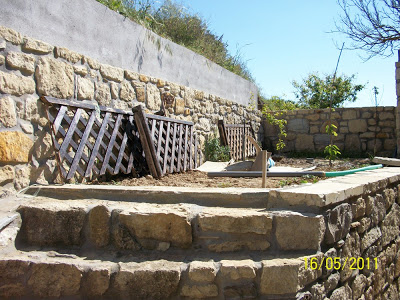 Today is the first day I’ve actually been able to sit outside in the morning drinking a cup of coffee. So at last, three consecutive days of sunshine – this morning is still and warm (19.4C at 9.40AM). Long may this continue.

Tuesday 17th May
It was such a lovely day yesterday I was struggling to stay in the house at a laptop. Caroline was sitting outside roasting whilst I was inside with a jumper on, considering whether to change out of my shorts and put on jeans. (Yes, it’s true that stone houses are cool in the hot sunshine, but it’s also bullshit that they’re warm and snug when it’s cold outside.) 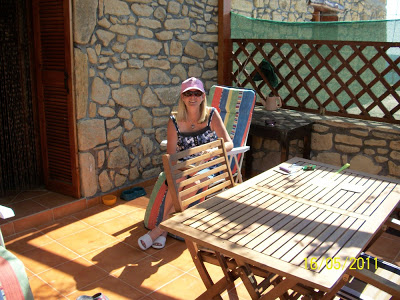 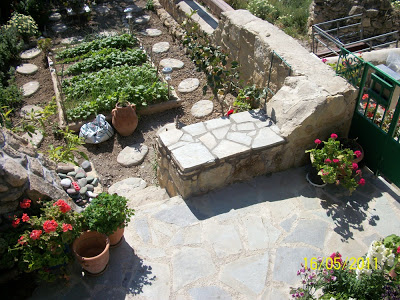 In the end I gave up and headed outside, deciding to take on a job I’d intended to do for some time and of which Caroline had reminded me. I mixed up some sand and cement and laid some ‘karisto’ on the end garden wall, turning it into a useful platform rather than an expanse of stone you couldn’t even stand a cup on. By the time I’d finished, my upper back, where I’d smeared some sun lotion, felt okay, but my lower back was burning. I came inside and sat down to write a thousand words and the burning sensation increased. By the time I went to bed I really knew I had been thoroughly seared – it being too painful for me to slide into new positions in bed. There you go, four years here and I still haven’t gained enough respect for the power of the sun here.